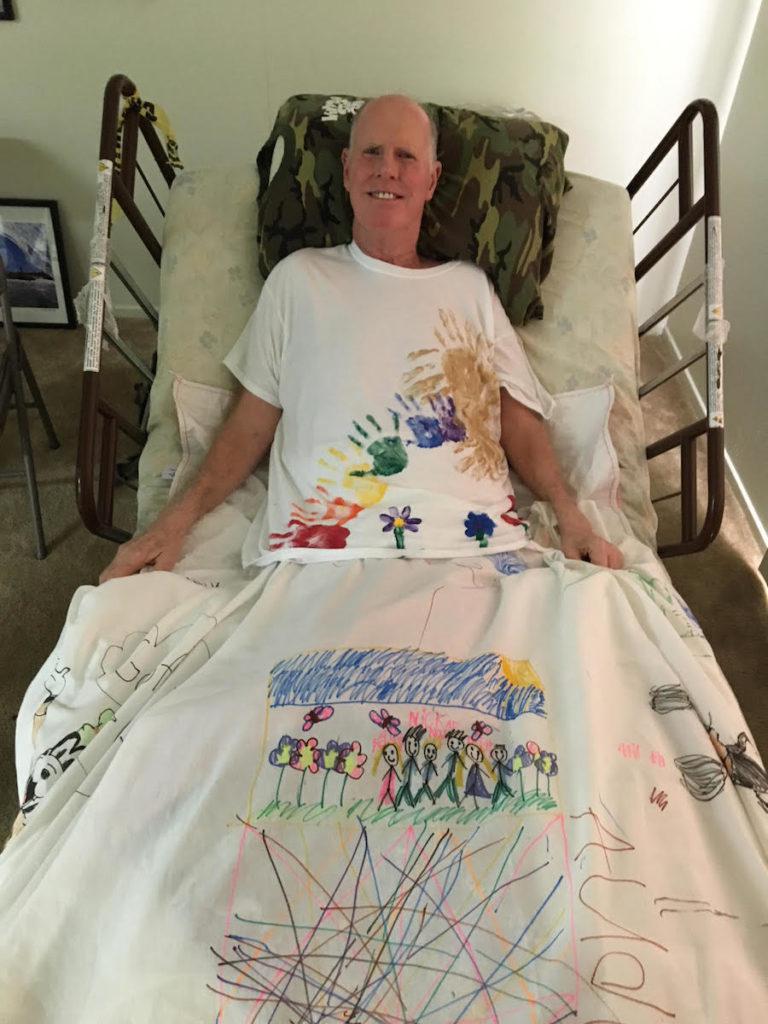 Bill Andrews was an amazing man.

In the few weeks that I knew and cared for him as a patient, I came to admire and respect him a great deal. As is the case with many of my patients, our relationship was brief, but it was deep, extremely meaningful, and left me a changed person.

Bill led an extraordinary life, as an engineer and innovator, a big wave surfer, an adventurer, and a devoted father and grandfather.Less than 18 months before we met, Bill had been surfing in Peru. By the time I met him, he had no use of his legs and only limited use of his arms. He was confined to bed, wearing diapers, needing to be fed, and relying on others for pretty much everything.

ill had Amyotrophic Lateral Sclerosis, or ALS.Commonly referred to as Lou Gehrig’s Disease, ALS is a neurologic condition with no known cure, that causes progressive muscle weakness and eventually loss of all muscle function. The one thing that continues working properly in advanced ALS patients is the brain.The brain is acutely aware of everything that is happening to the body, but powerless to stop it.

Bill had been officially diagnosed with ALS a year previously.  He’d been having symptoms for several months before that; however, as a lifelong surfer and hard-core athlete, he had ignored the early symptoms, attributing them to old sports injuries and aging.

People can live with ALS for many years with a tracheostomy and feeding tube. Stephen Hawking, the renowned physicist, was diagnosed with ALS at age 21.   He has a rare form of early-onset ALS  but is still living at age  75.  He’s had a tracheostomy for over 20 years and receives nutrition through a tube in his stomach.  There are others who make this choice as well and live for years, receiving total care from others.

Each person has the right to make their own decisions about these issues, and Bill was well aware of that. He’d been extremely clear from the time he first learned about his diagnosis that he would rather die sooner than live for years being dependent on people and machines.  His family (including his mother,  three adult sons, and a  brother and sister) understood this, and never tried to convince him otherwise.  They loved him enough to honor his wishes.

So when things deteriorated to a point that was unacceptable for Bill—he began noticing changes in his ability to swallow and take a deep breath—they started doing some research.

By Bill’s wish, they were committed to discovering how he could legally end his life at the time, place and manner of his choosing, and have the most peaceful, pain-free, and dignified death possible.

As an adult resident of California, Bill had the right to request a prescription for a lethal dose of medication from an attending physician, through the End of Life Option Act.

Bill’s primary doctor was willing to help, but he had no experience with the physician aid-in-dying process (also known as Death with Dignity) and was uncomfortable being the one to guide Bill and his family.  Knowing that I have considerable experience supporting patients and families down this path, his doctor reached out to me. I was honored to provide the guidance and support they needed, and to help this physician understand more about the process as well.  This is how I came to know Bill and his family.

I’m writing this an hour after Bill died.  His death was as dignified and peaceful as he had hoped.  In fact, it was beautiful.

He was surrounded by his three sons, his brother, his sister, his 95-year-old mother, and me.

Right before he took the medication, Bill’s mother performed a graceful Hula dance at the foot of the bed, reciting a sweet poem and promising that she would join him before very long.

Bill smiled and told everyone in the room that he had never felt more peaceful than he did at that moment.

Then, without hesitation, he drank the six-ounce mixture of medication dissolved in water and fell asleep within minutes.

Before he fell asleep, Bill called me to his side, took my hand, looked into my eyes and smiled up at me. He thanked me for helping him and said, “You are a warrior. You’re on such a good path. The right path.”  It was a powerful moment for me.  While I don’t think of myself as a warrior, I do believe I’m on my right path. Bill’s deathbed proclamation was further confirmation of that.

While Bill’s family took turns holding his hands and murmuring words of love and comfort, his breathing slowed, and then stopped.

Fifteen minutes after drinking the medication, Bill was dead, his spirit released from the body that had become a prison.

The photo at the top of this post of Bill was taken a few hours before he died.  It shows a man who knew joy.  He knew sorrow as well, but he chose to live in joy instead of sorrow.

The T-shirt he’s wearing was hand-painted by his six grandchildren, who are all between the ages of three to 12, the day before he died.  They came to visit but had no idea they would never be seeing him again. Their handprints represent the colors of the rainbow, like a ladder reaching up to the sun, which is comprised of the handprints of his three sons. He wore the shirt so that his grandchildren’s hands would be embracing him during his final journey.

Bill wouldn’t want anyone feeling sorry for him.  Really.  He had a great life and wouldn’t have traded a minute of it.  He made sure everyone knew that.

Why am I sharing this incredibly intimate experience?

Because I want Bill’s experience to help other people.  That’s what Bill would want.  That’s why he recorded a podcast interview with me four days before he’d be dying. You’ll be able to hear that episode soon. That’s why Bill agreed to speak with a journalist writing a story about physician-assisted aid in dying less than 24 hours before he would be ending his life.  He wanted others to benefit from his experience, and from his journey.  By sharing some of Bill’s story, with the full permission of his family, I believe I’m doing my part to help Bill’s legacy carry on.

For the past few weeks, since he learned that he would have this end-of-life option available to him, he had experienced a greater sense of peace than any other time in his life.  He repeated that several times to me and others. There are no words to describe how I feel, knowing  I was able to offer this kind of peace of mind to someone staring into the face of death.

Bill’s choices may appear to have been difficult to people looking in from the outside, but for him, given all the options available, it was the only choice that made sense.  So it was actually simple, once he found the support he needed. I’m sure I would very likely make the same choice under the same circumstances.

If you or someone you care about is facing challenging decisions about how to navigate through a serious or terminal illness and looking for more guidance or want to have an open and honest discussion about what options are available, I’d be happy to have that talk with you.

Feel free to contact my office at 858-925-7554 to schedule a complimentary phone consultation or use this form so I can get in touch with you.