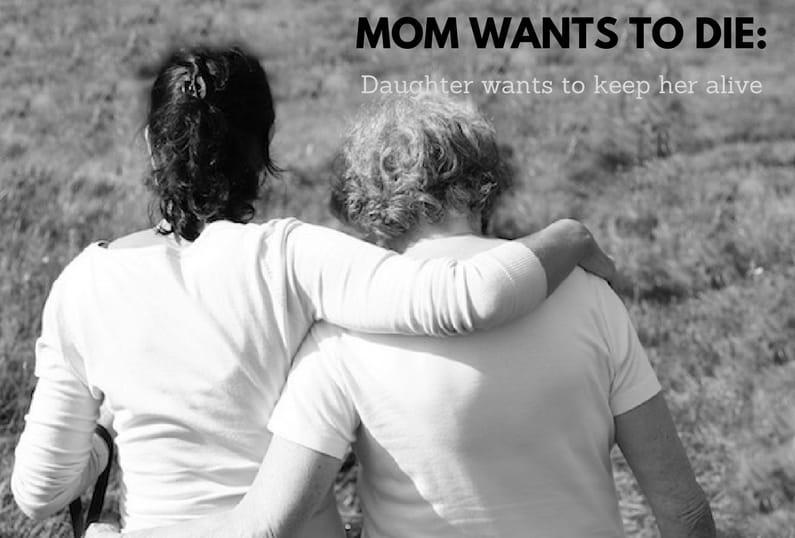 One recent afternoon I sat and watched as one of my patients pleaded with her daughter to allow her to stop fighting—against death.

Elena, a brave, bright and graceful 93-year-old woman from South America, had been struggling for years with several medical conditions, including heart failure, kidney failure, and anemia.  Despite being subjected to a variety of tests, treatments, procedures, and hospitalizations, her health was declining, and she’d made it clear to me that living felt so burdensome that she just didn’t want to continue. For the past several years, Elena had agreed to all of the tests and treatments at the urging of her daughter, but she was ready to call it quits.

Elena’s doctors had told her that if she kept at it, she could possibly live for another couple of years, but she would require more frequent visits to doctors and hospitals, blood transfusions, and despite the treatments, she would become progressively weaker and more dependent on others.

Elena felt it was time to let go, and she was at peace with that decision. She was 93 and had led a wonderful life.  She wasn’t in pain, and she wasn’t particularly unhappy, but she was very tired. And she missed her husband, who had died almost 10 years earlier.

Her daughter Maria, however, was unwilling to concede the fight. For a number of years, her life had revolved around taking care of Elena, scheduling appointments, addressing her increasing needs. She was clearly afraid of losing her mother, and those fears were placing a dark cloud over her mother’s decision, and robbing them both of a most precious gift— a peaceful, regret-free end-of-life experience.

On this particular day, I bit my tongue, to the point of bleeding, as I sat and listened to Maria. She was scared and feeling out of control and pleading with her mother to go through “just one more” treatment, one more transfusion so that she could stay around a little longer.  Maria wasn’t ready to let her mom go, insisting that she just wanted to give her more “quality of life.”

I felt tears welling in my eyes as Elena grasped her daughter’s hands in her own knobby fingers, and in a faint, cracking voice begged, “Please, Maria, won’t you just let me go in peace? This is what I want.  Can’t you see that?”

After many seconds of silence, Maria said the words, “Okay, Mama, I will.”

But I didn’t think she really meant it. To me, it seemed like she was just saying the words her mother wanted to hear, to end the discussion for the time being.  I’d heard it before.

Maria couldn’t accept that this was the way it needed to be. This was not going to go well.

Elena deserved to have control at this point in her life. I felt like I needed to intervene, to protect her from being subjected to more of what she clearly didn’t want—what she dreaded. But I had to tread lightly.  I knew that if Maria felt like I was pushing too much, I would not be welcomed back, and Elena would be fending for herself.

This was not about Elena wanting to die. She didn’t want to die.  She loved life and had led a very rich and meaningful one. But she knew her body was failing.  Her life force was ebbing, and she was ready.

At the end of the visit, Maria walked me to the door, and we stood and looked at each other for a few seconds before she stuck out her hand and thanked me for coming.  She said, “I’ll try.  I swear I’ll try.”  I felt a glimmer of hope.

I held her hand and said, “I’ll be here if you need me.  Let’s not let your mom suffer.”

A few days later we were able to sign Elena onto hospice.  She had no more procedures, treatments or hospitalizations.  With me guiding and overseeing the process, she was supported by a team of doctors, nurses, social workers, aids and volunteers who came to her home to provide her with comfort and care.

Maria had a difficult time, but with guidance, loving support, and patience, she was ultimately able to give her mother what she had so desperately asked for—a peaceful, dignified and natural death.

This work is not easy. But for the life of me, I can’t think of a more valuable and meaningful way to spend my days.