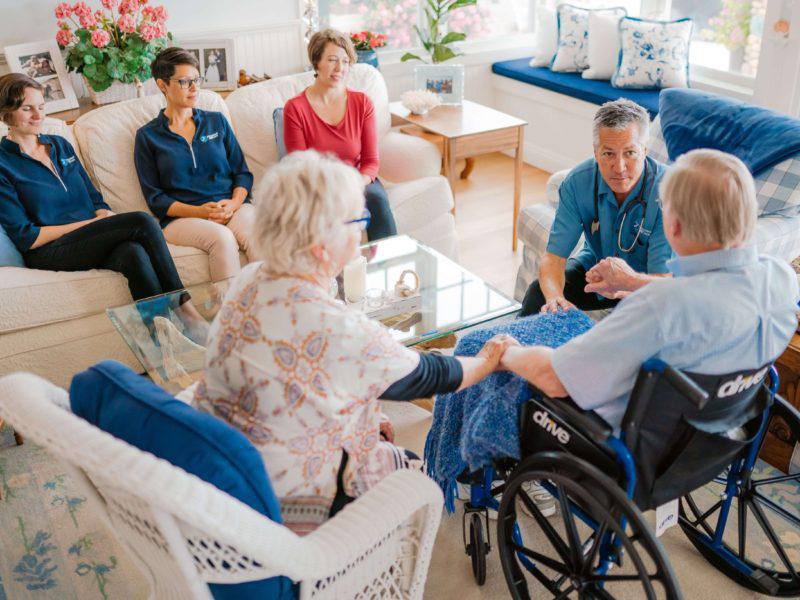 This article should not be considered not medical or legal advice. It is strictly for general education on the topic of the California Medical Aid in Dying (MAiD) process. Please seek professional consultation on this topic before making any decisions. This is a partial transcript of a recent video recording of Facebook live. It has been lightly edited for written clarity and length. Please call us with any questions you may have.

Part one of this series will give you an overview of what Medical Aid in Dying (MAiD) is and the basic rules of the California End of Life Option Act.

First, I will share a little bit about my practice so anybody who’s tuned in understands what I do and how to get ahold of us. I spent the first 25 years of my up my medical career as an emergency physician and took care of lots of people who were dying, who were actively dying or in the process of dying or were struggling in some way near the end of life.

Sometimes they hadn’t prepared properly so their families weren’t prepared to allow that to happen in a natural way. There was sometimes a lot of angst and a lot of struggle over this ethical issue of what do we do with people who are at the very final stage of life and we may not know what they want or don’t want. As I matured as a physician and moved further into my career, I actually came to the point where I realized that there were people who shouldn’t be saved who shouldn’t have all extraordinary measures attempted.

To allow somebody to have a natural, peaceful death would sometimes going against the grain and against the establishment and that became a bit of a moral issue. I eventually moved into working in palliative care and hospice. There, I had an epiphany and found that I had a calling to help people have a better death. Part of that came from an experience with a friend of mine who died in 2001 of melanoma. I saw how it how it could be done much differently.

As I started moving into this into this palliative care and hospice world, I actually became very clear that we were not, in many cases doing the best job we could and not serving people optimally as they were approaching the end of life and certainly not serving their families optimally because end-of-life care is delegated to hospice, which is basically a Medicare insurance service with many constraints and limitations associated with it.

So, I stepped out of that system to provide another level of service to fill the gaps and support people who were struggling with end-of-life challenges.

We started Integrated MD Care which has doctors and nurses and social workers and spiritual guides as well as holistic integrated practitioners who care for people in their homes, while we provide a high level of care. We support people who are on hospice. We support people with any type of complex health condition, especially serving people who are approaching the end of life. And we do this in a loving way, in a compassionate way, and in a very professional way. It’s medical care, but it’s also spiritual care that touches deeply and we support the patients and families equally.

I started my practice in 2016 in January and in June of 2016 The California End of Life Option Act became effective.

It had passed in October of 2015 became effective in June of 2016 and I anticipated that once this law went into effect that physicians would be willing to support their patients and hospitals and systems to effectively guide people through the process.

What I discovered very quickly, is that most systems, most hospitals, medical groups, and hospital systems weren’t prepared. They didn’t have processes in place, so physicians were uncomfortable supporting patients. Patients were not getting access to Medical Aid in Dying even though it was now legal for them to do so. The process has been legal in Oregon for almost over 20 years.

In California it became effective in 2016, and now a number of other states including Hawaii and Colorado and New Jersey Main have adopted Medical Aid in Dying laws as well. But what was happening back in 2016 is that people couldn’t find a doctor to support them and they were getting their condition was worsening and they were losing the opportunity to the ability. They were suffering, struggling and were frustrated and afraid. And they were angry.

So, I became an expert in providing support for people who are looking for help through Medical Aid in Dying. I have a team of people who are very well-versed and confident and competent in supporting people through this complex and challenging time.

It’s amazing work and it’s an honor for me and my team to be able to support people and allow them to feel dignified and empowered and to have choices when it comes to how they will die when dying from a terminal illness. There are a lot of questions about Medical Aid in Dying and myself and my team and I field questions and calls from people every day who are looking for information about Medical Aid in Dying, how to qualify and how the law works, and whether it’s legal. And there’s a lot of misinformation out there. There are a lot of myths and untruths in both professional and lay communities.

I continue to hear stories of healthcare providers designed to sway people away from choosing this option and it’s often misleading and a lot of times it just comes from not having the correct information. So, we also do a lot of teaching, training and in-services.

We’re helping the medical community understand more about this process how to support patients, how to refer patients and how the law allows people to have a choice and feel empowered and feel dignified as their life is coming to an end. I put together a series of questions that are addressed to us most often. I’m doing this so that it becomes a resource and a tool.

How does somebody qualify for Medical Aid in Dying (MAiD)? Who is this law designed for?

The law is basically designed for people who are residents of California who are adults 18 or over who have a terminal condition that is likely to end the person’s life within six months. If it follows the typical course, they need to be competent to make decisions. They need to have decision-making capacity meaning they understand the implications. They understand the consequences of what they’re asking that they’re able to take in information process it and understand what it is that they’re asking for.

They have to have decision-making capacity. They need to be able to ingest the medication on their own. Nobody can give the medication to somebody else. It has to be done voluntarily by the individual knowingly knowing that when they take this medication they are going to die. Those are the basic qualifications: resident of California, an adult 18 or over with terminal illness, and able to make decisions and has decision-making capacity.

So how does a person qualify? What’s the process?

It’s fairly straightforward. An individual who qualifies based on those criteria needs to make a verbal request directly to the attending physician. The attending physician may be their physician, the person who’s been taking care of them over time. It may be somebody who’s responsible for their care through hospice, for example or it may be a doctor who is going to be involved in their care from that point forward helping to guide them through that terminal illness.

They need to make two requests, verbal request face-to-face with the attending physician alone. Just the doctor and the patient requesting medication to end their life if they choose to take it.

Those requests need to be at least 15 days apart. They can be more than 15 days apart, but they can’t be less than 15 days apart. Many people who are making this request want to do this as quickly as possible. And so, they would want to have their second appointment with the attending physician on the 15th day or close to that.

The patient also needs to sign a written request which is requesting this support from the attending physician and that request form needs to be signed and dated and witnessed by two people. One can be a family member or a relative or somebody who will not benefit from the patient’s death in the will or in some other way. And the other person needs to be unrelated. Can’t be the doctor or part of the medical team. Both can be unrelated but only one of them can be related to the patient.

It’s interesting that some people refer to this. I’ve heard patients refer to this process of getting medical of getting access to Medical Aid in Dying as not – life insurance, but suffering insurance, they get insurance against having to suffer. Suffering through the final stage of a terminal illness.

That’s very reassuring for people having access to this option, brings great peace of mind to many patients who have witnessed very difficult deaths or they’re struggling and they’re terrified of what the end point of the final stage of their cancer or their heart disease or their neurologic disease will look like. They don’t believe that they should have to go through that to the bitter end. They want to soft Landing. They want another option. Just knowing they have that available to them is immensely comforting.

Read part 2 of this series here. The Details

Read part 3 of this series here. The Challenges

This article should not be considered not medical or legal advice. It is strictly for general education on the topic of the California Medical Aid in Dying (MAiD) process. Please seek professional consultation on this topic before making any decisions. This is a partial transcript of a recent video recording of Facebook live. It has been lightly edited for written clarity and length.

Please call us with any questions you may have.