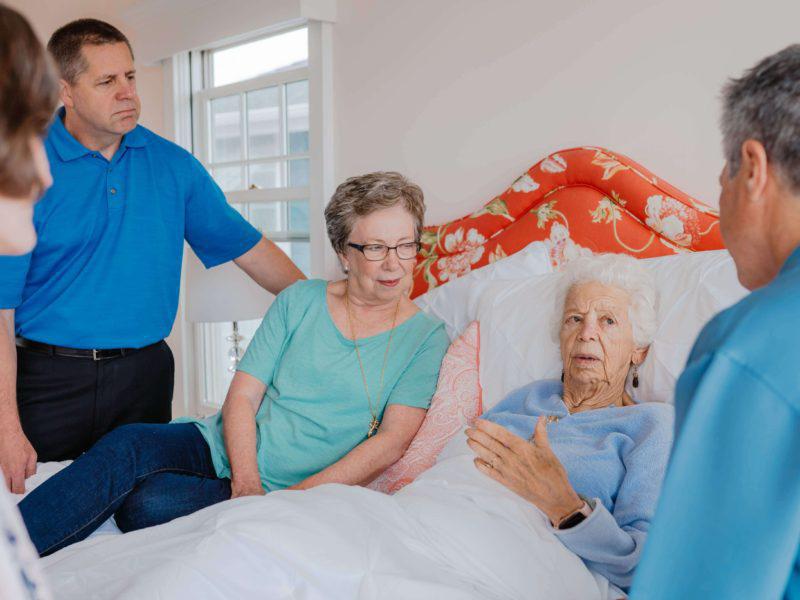 After our Facebook Live on the California End of Life Option Act and an explanation of how the Medical Aid in Dying process works, many of you requested this text. This text has been edited for written clarity and length. It should not be considered medical or legal advice. It is strictly for general education purposes. Please seek professional consultation on this topic before making any decisions and give us a call with your questions.

Read part 1 of this series here. The Overview

Part three of this series will give you more details as well as some of the challenges of how the Medical Aid in Dying process works.

What if the patient has a condition that won’t allow them to swallow?

Many patients have gastric tubes that the medication can be pushed into by the patient themselves. It can go in through a rectal tube. There are other options for people who can’t swallow.

What if the patient can’t lift the cup?

The patient can drink out of a straw. It is legal for somebody to hold a cup of liquid that the patient can drink through a straw. The law indicates that the patient needs to be able to get the medication into their system in some way. That’s the requirement. They have to be aware of what they’re doing, and they have to be able to ingest or take the medication in some way.

Regarding life insurance. What is the cause of death when somebody does Medical Aid in Dying?

Is it considered suicide?

The cause of death is never suicide. It’s the underlying illness patients who qualify for Medical Aid in Dying are dying from. They have a terminal illness and they’re dying. This is just a method allowing themselves to take control and allow the dying process to happen a bit more quickly.

That some people refer to this as physician-assisted suicide – those of us who support patients and work in this field bristle at that because suicide has a connotation which doesn’t really apply here. These people are dying. They’re not just they’re not dealing with psychiatric overlay here. They’re not depressed because of a situation that that is fixable. They don’t want to die. These people don’t want to die. I’m not suggesting that everyone who commits suicide wants to die.

Interestingly, people who go through Medical Aid in Dying are often people who had lived with a lot of control in their lives. They tend to be more educated. They have had professional jobs, were executives or they are people who lived with a certain amount of control. And they don’t want to die any different than they lived. People make this choice so that they can die in accordance with their values, in accordance with the way they lived.

I often refer to this as a physical, spiritual mismatch. Most of the people who we support through this process have a strong spirit. They still have a vital spirit, but their bodies are giving out, their bodies are failing them. Sometimes it’s been gradual. Sometimes it’s been very quick. Their bodies are no longer able to serve their wishes and needs and they can’t reconcile that. They have a physical, spiritual mismatch and they find that unacceptable. So, they are looking for a way to get out of that.

Who are the people requesting Medical Aid in Dying?

The majority of people who are requesting Medical Aid in Dying have cancer of one form or another. We take care of a lot of people with brain cancer, lung cancer, pancreatic cancer, ovarian cancer, colon cancer, melanoma. They are people who have tried multiple therapies, they’ve gone through everything that medical science has to offer, and they are now at a point where there are no other options for them.

We also take care of patients who have heart disease end-state heart disease, end-stage lung disease neurologic conditions, patients are a number of patients with ALS who are at the point where if they don’t if they don’t do something relatively soon they will lose the ability to breathe on their own and require tracheostomy or lose the ability to eat on their own and require a g-tube.

People want to have the choice of whether to go that route or not. It becomes a very challenging thing to determine whether somebody qualifies or not when they have a condition that is not clearly going to end their life in six months many times. Many times, it’s very clear that this person is dying, they may not live for more than a week or two or three or a month or two. In other cases, it’s much less clear.

There are times when somebody could die in two months, yet it’s possible that they can live for two years. The course of their illness is unclear, but they recognize that they would not want to live in the state that they’re in for two years.

These are nuances and many times it isn’t cut and dry and a lot of contemplation, discussion, researching records, speaking with other doctors is required to determine when somebody is qualified or not. Many times, I reach out to colleagues who also work with patients through Medical Aid in Dying and seek guidance and input from them because and we have a group of physicians who are collaborating and sharing experiences and guiding each other so we can create best practices.

What about dementia? If I have dementia, can I do this? Am I eligible?

Can I put this in my Advanced Health Care directive that when I develop dementia, or if I get to a point where I’m not able to live beyond a certain threshold that I’m establishing, could somebody then give me the medication because I’ve indicated at what point I would want it? The answer to that is no.

The individual needs to be competent and cognizant of what they’re doing and able to ingest the medication knowingly, or they can’t do it, or it’s illegal.

There are people in the beginning stages of dementia competent to make decisions, but they don’t have a six-month timeframe by the time that their condition has progressed to the point where they now have a six-month life expectancy. So unfortunately, we can’t help patients who have cognitive impairment dementia find a way out.

Does it always work? What if I wake up?

People are terrified of this and want to know they are not waking up. While I cannot ever guarantee anything a hundred percent, I can tell you based on my experience and the research I’ve done, it always works. I believe that there are extremely rare cases of people waking up 24 hours later and they may come back to some awareness, but they die eventually.

I know that doesn’t sound optimal and it’s not but at that point if somebody was to not die in a relatively short time frame from the medication, there would be hospice people to provide support for them to ensure that they stay comfortable through the end of the process.

That’s never happened in my experience. I think it’s an extremely, extremely rare thing. There are conditions that people have that might make it harder for them to absorb the medication or for it to be effective and everybody is different. We don’t treat everybody the same. So, if there are things that would interfere with being able to absorb the medication or process it then we look at other options of and change things up a little bit.

How much does it cost?

It’s variable. My practice is unique and that I don’t work with insurance. I’ve decided to work outside the insurance model because the care that we deliver to patients which is mostly primary geriatric care and palliative care and caring for people in their homes providing this kind of wrap-around service, insurance won’t pay for that. So, we have a fee that we that we charge.

It’s a sliding scale depending on what people are able to pay. If somebody goes through their typical doctor’s office or the healthcare system, they’re part of, it’s typically covered, they may have co-pays like any other visit. Most of the time the medication is not covered by insurance.

It is covered by Medi-Cal here in California for a person who’s on hospice. Medication here cost somewhere around between $600 and $700 dollars for the combination of medications. There are very few pharmacies that are comfortable or capable of putting that medication together. So, there’s only a handful and they do the lion’s share of dispensing this medication. The payments go directly to them.

So, my care and depending on the circumstances and the distance that we’re traveling and what people are looking for, is anywhere from free for people who have no resources, to several thousand dollars for the comprehensive care that we provide. We never want cost to be a factor in somebody being able to have this option available to them or not.

There are many people who are traumatized and have PTSD through the caring for a loved one with a serious or terminal illness. Our goal is to support those people as well so that they don’t have to deal with guilt and resentment wishing they had done something different for the rest of their lives. That’s what we are all about. Helping people through this very emotional and complex Medical Aid in Dying processes.

How does this it affect loved ones?

Medical Aid in Dying allows loved ones to feel that they gave a loved one a gift by allowing them to have this option. Loved ones are supporting them and being present with them at the time where they could share their love and their feelings in a deep and meaningful way. They are able to have this conversation and then in an empowered way, fall asleep and die peacefully. The grieving process is very different for those left behind. It’s often much less traumatic.

We stay in touch with a lot of our patient families and we hear from them how this process impacted them, in some cases it transformed them. They become incredibly passionate about wanting to share this and wanting others to know this option is available because of how beautiful it was for them and for their loved one.

Please call us with any questions you may have.

Read part 1 of this series here. The Overview

Read part 2 of this series here. The Details

This article should not be considered not medical or legal advice. It is  for general education on the topic of the California Medical Aid in Dying (MAiD) process. Please seek professional consultation on this topic before making any decisions. This is a partial transcript of a recent video recording of Facebook live. It has been lightly edited for written clarity and length.